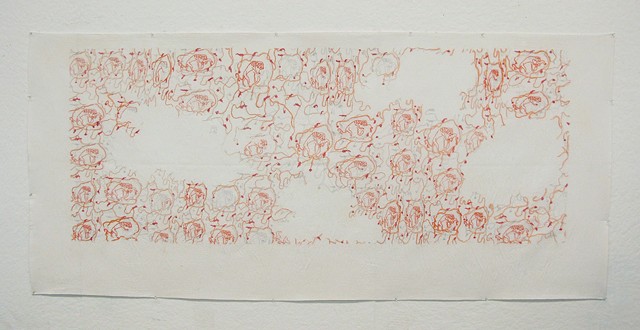 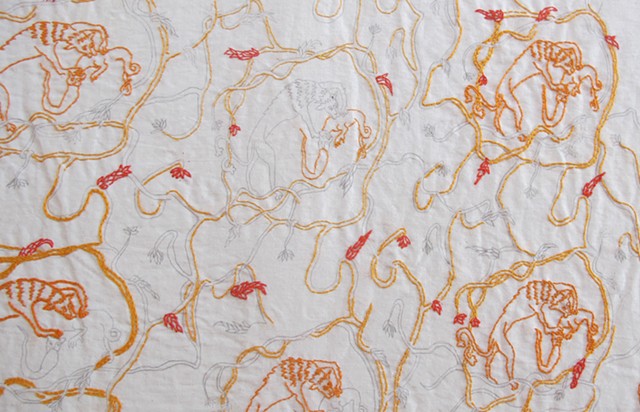 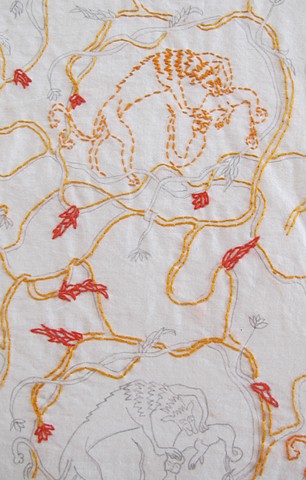 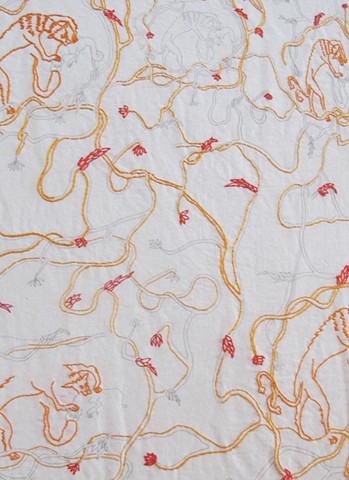 My practice uses repeat patterns to illustrate time’s translation of personal and social ideas. I incorporate repeat patterns that are abstracted to the point where they do not repeat seamlessly but become unique works on paper or fabric. I use imagery taken from graphic works of art throughout history as visual resources to start a drawing before incorporating personal imagery to construct a repeat pattern. Natural imagery is then added into the pattern, such as wild foliage and vines, to combine decoration with entropy threatening to human comfort. Like kudzu, they climb and coil around the patterns’ subjects to hint at the loss of control. In each art piece, parts of the pattern get obscured or manipulated to refer to a change in ideas over time.

In my most recent artwork, the pattern consists of imagery taken from a medieval bestiary. I manipulated the pattern in Photoshop to make multiple variations of it, connected them and drew them over eight feet of fabric. I then covered parts of the pattern in embroidery. Since illustrations in bestiaries were used to convey ideas about morality influenced by the Bible, the imagery in the pattern refers to moral messages repeating and changing over time. Embroidery is both women’s oppression to and subversion of the patriarchy, with the stitching exemplifying the feminine adherence to, struggle against, and reclamation of archaic ideologies. Sometimes the stitching is covering and reclaiming the drawn pattern: at other times, it is complicitly bound to it.

My work revolves around the notion that culture and ideas are constantly changing while also repeating. I use repeat patterns to represent society’s struggle to socially change and progress while clinging to archaic ideologies. The vines and foliage in the patterns wind throughout time threatening to envelope the subjects of the motifs. My work is influenced by observations of current events while having an understanding of historical precedents. It embodies the frustration of watching culture change and arts and sciences progress while being governed and influenced by beliefs that are used to spread ancient but ongoing human flaws of intolerance and ignorance. The back and forth of this social dissonance holds more weight now than ever.